The family is still a fundamental value in Peru

“Thanks to God, the value of the family, founded on the marriage between a man and a woman, continues to be a very important value for most Peruvians.” With these words, Msgr. Eguren Anselmi, Archbishop of Piura and head of the Committee for the Family of the Peruvian Episcopal Conference, described the situation in his country during the Ad Limina Visit of Peru’s Bishops at the Dicastery for the Laity, Family and Life.

This is still a fundamental value for the majority of Peruvians, despite the fact that, as elsewhere, the Christian values of the family and life are under attack. In most cases, the prelates said, this phenomenon is foreign to the country’s culture and comes from outside. “The people are with the Church!” said some of the Bishops.

They, then, told about how the Catholic laity—along with the clear stances taken by the Episcopal Conference—has been able to stop some law proposals concerning the family. Lay people got mobilized and succeeded “in speaking a non-religious language, in defense of their children.” With regard to this, Msgr. Carlos Enrique García Camader, Bishop of Lurin, stressed that “it is necessary to give the credit to Peru’s laity for this victory. Moreover, they must be engaged in politics and work in society to defend Christian values.”

The Bishops also spoke about the commitment, especially of the young, to volunteering, on social issues, and alongside the poor. “During the recent floods, the attitude of the young people was edifying.” “Our task—added Msgr. Ricardo García García, Prelate of Yauyos—is to give them a doctrinal and spiritual formation. Enthusiasm is not enough. Disciples are needed!” 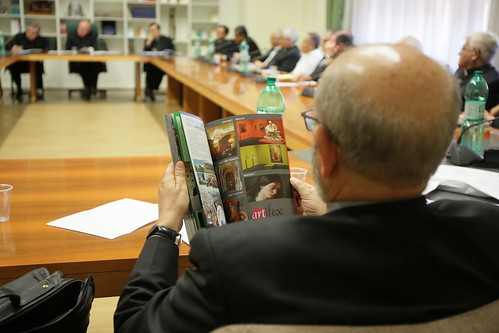 Bishops trace out some paths to stem the crisis of faith

Aware of the loss of ground that their Church has been facing for several years now, the ...

To bring young people back to the Church, it is necessary to offer them meaningful experiences

. So many pressing pastoral issues! Speaking of the laity, they expressed deep concern about ...

"We will not lose the battle of hope"

On various burning issues of bioethics and civil rights such as medically assisted ...

Ad Limina Visits have recommenced after the stop due to pandemic

A few days ago, with the arrival of the first of the three groups of the bishops from France ...

Laity, family, and life in the American Church

In recent weeks, various groups of American bishops in Rome on their ad limina visits stopped by the ...