Last Thursday our Secretary, Father Alexandre Awi Mello, met with a large group of participants in a postgraduate course organised by the Academia de Líderes Católicos in cooperation with the Pontifical Commission for Latin America.

Since 2016 the Academy, sponsored by four Chilean universities, has been running a degree course on the Social Doctrine of the Church that has had more than 200 participants, parliamentarians, university chancellors, academics and top managers coming from 15 Latin American countries. Thirty of these are attending a course being held in the Vatican from 24th February to 4th March.  The general aim of the course is the education of future generations of social leaders committed to building the Common Good at the service of the Latin American peoples, in the light of the Church’s teaching and especially that of the current pontificate of Pope Francis. During the course there will be reports from experts, visits to some Dicasteries, meetings and ceremonies. 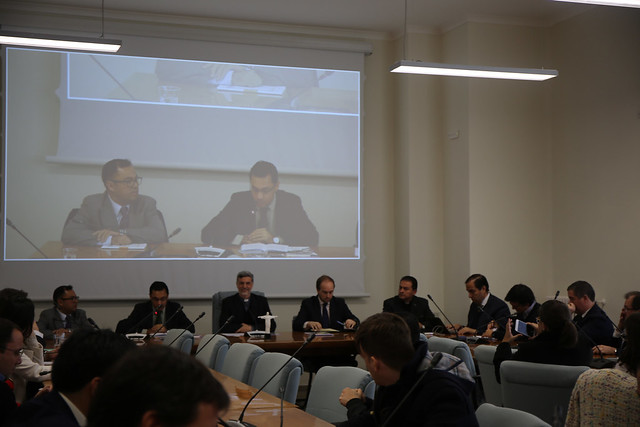 From the pandemic to the “restart”

“The current situation runs the risk of driving people away from sports, especially young people, ...

Together with the elderly: a pastoral ministry that reaches out

After launching the campaign “Every senior is your grandparent - #SendYourHug,” which has had an ...

The Dicastery listens to young people

After weeks of sharing and discernment, twenty members of the International Youth Advisory Body met ...

Towards the Horizon with Our Feet on the Ground

“Towards the horizon with our feet on the ground” was the theme of the 5th National Assembly of ...

The global health crisis has had an enormous impact on the lives of many and has brought about a new ...