Youth at Heart. The 30th anniversary of the John Paul II Foundation for the Youth

Thirty years after its establishment in our Dicastery, the John Paul II Foundation for Youth celebrated its anniversary, during a meeting in the Vatican, by presenting its activities and new projects for young people around the world.

To talk about the history, activity and mission of the Foundation, at the opening of the event presented by host Lorena Bichetti, was Linda Ghisoni, undersecretary for the lay faithful of the Dicastery, explaining that in recent years "the mission of the foundation has not changed: to promote the evangelization of young people and support youth ministry in all its areas”. Undersecretary Ghisoni recalled what John Paul II replied to those who called him "inventor" of the World Youth Day (WYD): “No, it was the young people themselves who created them, and they have become a great testimony that young people give of their commitment, and a powerful means of evangelization. In them there is a great potential for good and a lot of creativity.”

According to the head of the Dicastery's Youth Office, Father João Chagas, "World Youth Day produces a network of generative friendships (and), beautiful and fruitful initiatives. This, together with volunteering, is the most beautiful legacy of WYD, and the John Paul II Youth Foundation is its guardian.”

Pamela Fabiano, a member of the Foundation, and official of the Dicastery, presented the logo and the website of the Foundation, www.fondazionegiovanni.va, with the section dedicated to collecting the stories of all the World Youth Days, from its first celebration in Buenos Aires 1978, to recent celebrations, in Italian, English, and Spanish, and soon, also in French and Portuguese. "An archive like this was missing,” she underlined, “and it is also a way to connect those who have met on World Youth Days".

President Daniele Bruno underlined the importance of the conferences on the Care of Creation, the next of which will be held in Lisbon on the 31st of July 2023, at the Catholic University of Portugal. These conferences, which began in Rio de Janeiro in 2013, today follow in the footsteps implemented by the Holy Father Francis with the Encyclical Laudato si'. 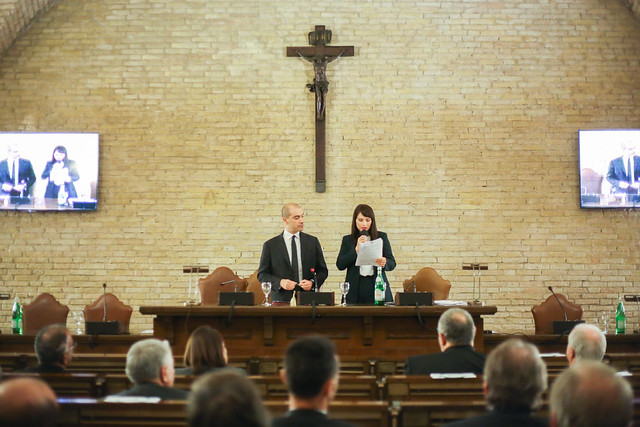 Following the announcement of the Holy ...

Lisbon 2023: walking together towards WYD in August

In the week marking 200 days until World Youth Day ...

Youth protagonist of the mission

#AriseandGo: like Mary, an invitation to the Youth to arise and go towards the poor

Since last year, the World Youth Day in the ...