The prefect of the Dicastery, Card. Farrell, Undersecretary Linda Ghisoni and Dr. Margaret Karram, of the Focolare Movement, spoke

On the afternoon of March 3, the book on the governance of associations, published by Libreria Editrice Vaticana, was presented in the Marconi Hall of Vatican Radio. In addition to the General Decree on the mandates of government in associations of the faithful - promulgated on June 11, 2021 - and the Explanatory Note that accompanies it, the volume contains the proceedings of the Meeting with the moderators of associations, held last September 16 in the New Hall of the Synod, at which Pope Francis spoke.

The presentation, moderated by Dr. Lorenzo Fazzini, LEV's editorial manager, began with words from the prefect, who stressed the Pope's interest and dedication to associations and movements. Pope Francis, returning from his trip to Slovakia only the day before, did not want to miss the September 16 meeting in the Synod Hall to be with the leaders and moderators, who were present both in the hall and via videoconference.

Card. Farrell recalled a number of passages from the Holy Father's address, in particular the one that refers to the "«true and proper ecclesial mission» that associations and movements have, namely, that of «living out and bringing to fruition those charisms that the Holy Spirit, through the founders, has given to all members»". This mission also entails "the responsibility of the movements to build the future of God's holy faithful people, and to do this it is necessary to have the «readiness for a constant encounter with the Lord, for a constant personal conversion»".

Following the prefect, the undersecretary for the lay faithful, Linda Ghisoni, reiterated the importance of investing in the formation of the members of the associations, so that "they may better reveal their personal abilities that will make them fit to assume in turn responsibilities of various kinds, not least those related to the management of the very association to which they belong".

Finally, Dr. Margaret Karram, president of the Focolare Movement explained how the General Decree was received. We were taken by surprise by the Decree," she explained, "which at first raised several questions and the need for clarification. Then, reading it, we grasped the spirit that animates it" because "it is not the intention of the Church to curb the charismatic impetus of the movements, their innovative strength and their missionary impact. Rather, there is a desire to help them achieve their own goals, which are always oriented towards the good of the person, the Church, and society”.

After the speeches, there followed an interesting time of questions from the journalists present in the room as well as the sharing of experiences and testimonies by some consultants of the Dicastery and moderators and leaders of international associations and movements.

Present were, among others, Paolo Maino, founder of Via Pacis, Marco Impagliazzo, president of the Community of Sant'Egidio, Davide Prosperi, president of Communion and Liberation, Pino Scafuro, moderator of CHARIS, Fr. Jesús Morán co-president of the Focolare Movement and Maria Grazia Tibaldi, secretary of FIAC. 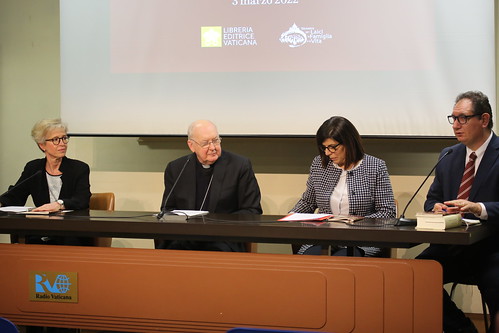 Passion for a renewed humanity in Christ is specific to Christians

“A synodal work, guided by the Holy Spirit, at the service of Church and society”

"Movements and New Communities. Identity in the Synodal Path of the Church"

Deepening the issue of working conditions within lay aggregations