“Until a few years ago, often only grandmothers accompanied the children at Baptism, and they frequently chose to go to a neighboring area to avoid being recognized. Nowadays, most Cubans ask that the sacrament be given to their children, and parents take a very active part in the rite: all want to take pictures of the priest holding the little baby in his arms.” In this image, donated by the Bishop of Holguin, Msgr. Aranguren Echeverria, during the Ad Limina Visit of the Cuban Bishops at Dicastery for the Laity, Family and Life, we can see the recent history of the Church in Cuba and its vitality today.

The Church there is largely composed of people who have approached the faith in recent years: it is estimated that 80% of members of the Christian community joined the Church after John Paul II's visit to the country.

In recent years, despite the difficulties, the Church has managed to maintain its credibility; This is so, according to Cuban Prelates, thanks to the courageous testimony of laypeople. “They were like the rest of Israel. Today, after the end of the ideological tide, their faithfulness is appearing.” In many cases, since it was not possible to build churches, they met in so-called “Casas de mission,” in apartments, on terraces, and in private courtyards made available to allow the faithful to meet.

The Bishops described a people, in all parts of society, with a great desire for God. Today, this religiosity is widespread thanks to the bond with the Pope, the centrality of the parishes, and the devotion to Our Lady of Charity, identified in the Catholic Church.

Evoking this devotion, Card. Farrell recalled the moving celebrations on the feast of Our Lady of Charity in his first parish, in Washington.

The Archbishop of Havana, Msgr. Juan de la Caridad García Rodriguez, introduced the topic of the family by explaining that “beyond the economic problems, the real crisis in those years in Cuba was the destruction of the family.” In particular, emigration and the need to move, including within the country, for professional reasons ended up dividing couples. Today, also because of the family crisis, Cuba’s society in general is gradually aging. In this climate, the Archbishop wanted to highlight the presence of young people who are striving to remain faithful to the Church’s teaching, and he called them real “titans.”

In any case, the Bishops feel that “the Cuban family wants to stay united.” This is shown, for example, by the great appreciation for mothers’ day—an occasion used by the parishes to talk about the beauty of maternity and life. 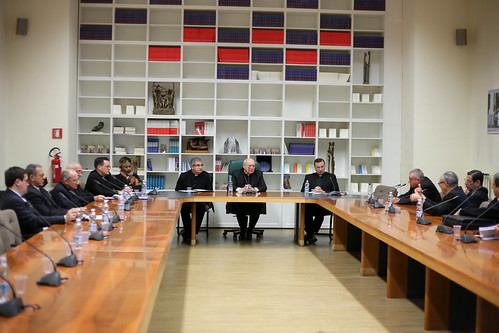 Marriage is worth it!

From 7 – 14 February, coinciding with both the beginning of Lent and St. Valentine’s Day, the ...

As announced today after the Angelus, Pope Francis has decided to institute a Church-wide ...

The elderly are a gift and a resource

“Let us transform the crisis due to COVID-19 into an opportunity for a paradigm shift, and for ...

The first international conference on the pastoral care of the elderly was an important ecclesial ...