Activities of the Dicastery

On the morning of June 26th, the Dicastery for the Laity, Family and Life met with the Archdiocese of Toledo (Spain).
H.E. Msgr. Braulio Rodriguez Plaza, Archbishop of Toledo, accompanied by a group composed of lay faithful and priests, told Cardinal Farrell, Prefect of the Vatican Dicastery, about the projects and activities followed by Toledo’s Family Ministry Office. Father Miguel Garrigos explained in detail the multifaceted activities of this Archdiocesan delegation.

The projects address all ages and life situations. Among them, the Group Santa Teresa—he briefly explained—assists women who are separated, divorced, or have been abandoned by their husbands.

Some of the women shared their experiences and bore witness to life and faith, dwelling on how they have been and are helped by the Church in their present situation, in conditions that are not easy. With great gratitude and emotion, they presented a path of Christian faith, renewed thanks to the presence of the Archbishop and his associates in the delegation for the family.

This path has allowed them to be reborn in Christian life, through the experience of mercy, and has taught them to forgive the serious offenses they have suffered. Reading Amoris Laetitia (AL), they were touched by the gaze of mercy that the pope offers in the Post-Synodal Apostolic Exhortation and by his invitation to all the baptized who may feel distant from the Church.

The women who spoke stressed the importance of the “accompaniment,” insisted upon in AL. Moreover, they emphasized that they were accompanied in all the painful moments and have been cured to a great extent; They have been reborn to the Love of God and, through the Church and her pastors, have deeply experienced His love.

Some priests also spoke about how family ministry functions closely with the social care ministries, especially with diocesan Caritas, because the situations described lead to dramas also from an economic and financial point of view.

Furthermore, the diocese goes out to respond to material needs of the many women who have serious difficulties raising their children.
This love for the children, they said, was the force that made them change their lives and, consequently, experience the love of the Church. In this regard, they have become a part of the church’s life and want to be instrumental in helping other women in such situations to experience the Church's maternal care.

The Archbishop thanked Cardinal Farrell and Msgr. Simon for having assured that a large group from their diocese will be present in Dublin.
The Prefect of the Dicastery heartily thanked them for the beauty of the project and the initiative of the Group St. Teresa, expressing his wish that this pilot project be presented at the next World Meeting for Families.

At the conclusion, Archbishop Rodriguez Plaza said with great joy that they were going to be received later in the day by the Holy Father, who had shown much interest and appreciation for the project of the Group St. Teresa. 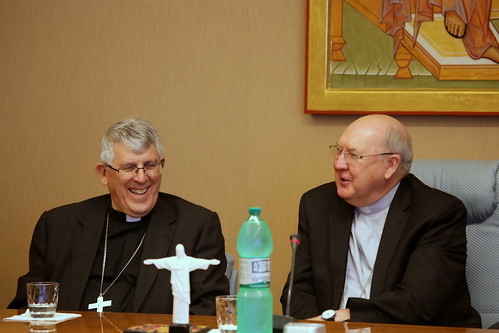 The Gospel is for everyone not just for some

On the 75th anniversary of the founding of International Young Catholic Students (IYCS-JECI), ...

Authority and Responsibilities of Governance in Lay Aggregations: A service ordered to the common good

Ad Limina Visits have recommenced after the stop due to pandemic

A few days ago, with the arrival of the first of the three groups of the bishops from France ...

"Everything is connected": sport and ecology for a meeting with God