Laos and Cambodia: Churches of Martyrdom and Resurrection

The Churches of Cambodia and Laos speak of martyrdom and resurrection. “When I began my missionary activities—said Msgr. Olivier Schmitthaeusler, Vicar Apostolic of Phnom Penh and President of the Episcopal Conference of these two countries—there was only one Catholic in my diocese. All the priests, religious and missionaries had been killed by Pol Pot or forced to flee. The Church in Cambodia no longer existed.”

Today the situation is quite different. The numbers are small, but the Church has been reborn and is striving to be outgoing, engaged as it is in educational activities and solidarity with the poorest.

Among these are the Christians, 80 percent of whom live under the poverty line. Sunday frequency among the country’s 23,000 Catholics is very high, reaching up to 60%. These are young communities, in a country with relatively low average age, formed mostly by people who have recently embraced Christianity.

Among them, there are many women who have found in the Church a place where their dignity is recognized and respected. Most of the offices in the three dioceses are held by lay people. The Church in Cambodia is preparing to open its first Catholic university and to celebrate a Year of the Family.

In Laos, the Church lives in an environment significantly marked by materialism, partly because of the difficult political situation,. The presence of priests and bishops—all Laotians—is limited. The small number of laypeople find it very difficult to manifest their religious affiliation. Yet the 50,000 Laotian Catholics, some of whom belong to the Hmong minority, are engaged in many charitable activities. Love for the poor is the Church’s area of freedom in Laos; for example, in some villages, it is still offers the only health care service.
On 11 December 2016, seventeen martyrs, Laotian and foreign victims of the anti-religious repression that took place between 1954 and 1970, were beatified. Among them were six Laotian lay catechists.

The churches of Laos and Cambodia, which constitute a single Episcopal Conference, recently celebrated a Local Youth Day. 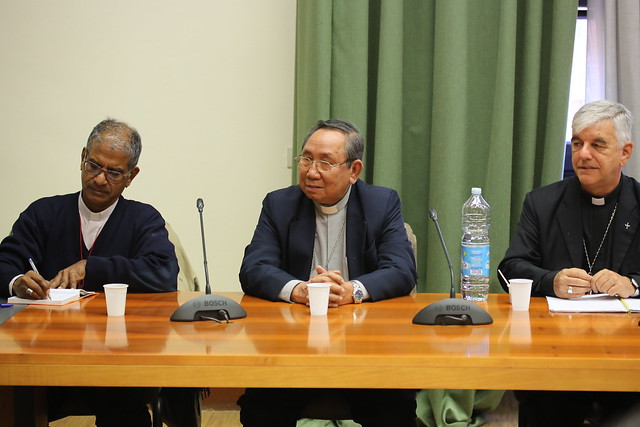