The Visit of the Bishops from Pakistan

The presence of the Catholic Church and of other Christians in Pakistan continues to be problematic. This was reported by the Bishops of Pakistan who came for their Ad Limina visit a few days ago. The Christians in the country have always been victims of discrimination and harassment, ranging from forced conversions and marriages to land grabbing, and including episodes of daily intolerance and violence, often linked to the controversial “blasphemy law,” which punishes those who offend the Koran with life imprisonment and sentences to death those who insult the Prophet Muhammad.

Despite this, Bishops said that the community is devout and full of life. In the areas in which the greatest action is carried out (education, health, assistance to the poor), the Church’s work is highly appreciated by all, even if the formation of faithful still needs to be strengthened so that they know how to defend themselves against the propaganda of the Pentecostal sects and give reason for their faith in Christ even in a context dominated by Islam, by engaging in the interreligious dialogue.

With regard to the families, the Bishops unanimously emphasized the urgent need to strengthen the commitment to make them authentic domestic churches. Young people, on the other hand, continue to represent one of the Church’s major concerns in Pakistan: frustrated, anesthetized by fear, and without hope, they often get into drugs and see emigration as the only way to escape from an adverse destiny, exclusion, and poverty. Fortunately, in the country something is moving, although with difficulty: public institutions, for example, are encouraging the fight against illiteracy among the young.

For the Bishops, education represents a powerful instrument of social redemption for the many often illiterate young Christians, who thus gain new perspectives of access to more dignified work, an instrument for liberating their communities from the scourge of poverty and prejudices with religious underpinnings. 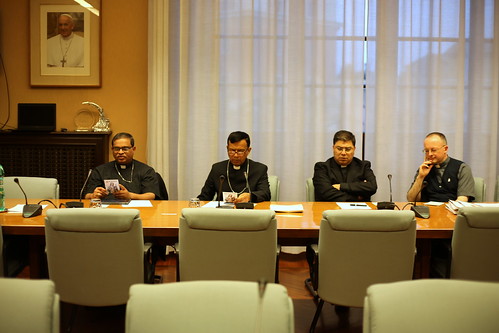 Video message of Undersecretary Gambino to the Episcopal Conference of Colombia

Reviewing the methodologies and content of programs for the premarital formation of young people, ...

An Ebook to Keep Saying: “Yes to life!”

The ebook of the collected proceedings of the international conference “Yes to Life! Taking care of ...