The Bishops are counting on young people

Young people are the key to fighting the social woes that are humiliating Paraguay. The Bishops of the Latin American country who, counting on them, have launched a three-year course of formation, are convinced of this.

This formation course, announced last year at the Marian Shrine of Caacupé, will include instruction and activities that are intended, on the one hand, for young people in parishes and movements so that they may become active and mature adults. On the other hand, the program will help to fight the social plagues in Paraguay and make it a more honest and solidary country.

The Bishops of the country’s fifteen ecclesiastical circumscriptions, in Rome for a visit to the See of Peter, were received by Pope Francis on the morning of Monday, 6 November. On Tuesday afternoon, they came the Dicastery for the Laity, Family and Life. The images of the Church in their country that they showed represent the its great diversity as well as the growing effects of secularization and the increasingly perceived fracture between faith and life.

Lay people are very committed to the Church but their commitment in the social and political spheres is constantly promoted and urged. This is a challenge that the Bishops are trying to respond to with biblical formation, the priestly magisterium, and the Church's social doctrine.

The Bishops are also looking attentively towards the family, another priority of their pastoral care. They have already dedicated three intensive years of formation and activity to this reality, which culminated with the visit of the Holy Father to the country in 2015. Now, the fruits have begun to appear in the form of greater involvement of families in the lives of local churches, and this is an important sign in a country where the percentage of civil marriages is much higher than that of sacramental marriages.

In the formation on the sacrament of marriage, the Bishops also use resources of associations and movements whose charism is focused on the family, although they firmly emphasize that the preparation for the conjugal union begins with baptism and, hence, with the remote preparation that can be ensured in families, often by grandmothers. 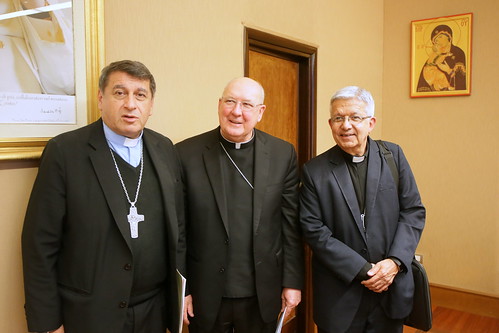 As announced today after the Angelus, Pope Francis has decided to institute a Church-wide ...

Note from the Dicastery for the Laity, Family, and Life

A Gift of Wisdom

“Dear young people,” wrote Pope Francis on the occasion of the 32nd World Youth Day, “you need the ...

The first international conference on the pastoral care of the elderly was an important ecclesial ...

Do you know that there is a great journey about to begin?

Dear young friend, Do you know that there is a great journey about to begin? Wherever you are, this ...