Charisms at the Service of Pastors for Ecclesial Maturity

Prefect Farrell at the Day of Study on “Charism and Institution:” “The ecclesial movements awaken the hunger for divine life.”

“Charisms must be considered from the point of view of evangelization, not from the point of view of a division of power within the Church. It is in the perspective of the new evangelization that the charisms can find their proper valorization.” Prefect Kevin Farrell’s said this in his speech at the Palazzo della Cancelleria, in Rome, on the occasion of the day of study promoted by the Evangelii Gaudium Center of the Sophia University Institute under the patronage of the Italian Canonical Association on the theme “Charism and Institution in Movements and Ecclesial Communities.”

In the charisms, the Prefect continued, “we often find—and in abundance!—living forces and enthusiasm, the capacity to announce, available time and energy, good biblical and catechetical formation, ability to welcome non-believers and non-practitioners fraternally, and, last but not least, the language adapted to our contemporaries.”

Cardinal Farrell then focused on the “contemporary charisms” spoken of in Iuvenescit Ecclesia, that “want to present to people today a proposal of a fundamentally global Christian life, investing every aspect of Christian existence.”

Thus, “welcoming ecclesial movements does not mean—he clarified—creating elite paths within dioceses and parishes but making ‘proposals for a global Christian life.’ The movements born of new charisms do not produce ‘religious professionals’ dedicated to some particular ministry, but Christians, aware of their faith.”

The charisms are, consequently, “at the service of the pastors,” and precisely on the basis of “this intrinsic relationship between Christ’s mission and the mission of the Spirit is founded the link between hierarchical gifts and charismatic gifts.”

The charisms, and the ecclesial aggregations that arise from them are not—added the Prefect—“something ‘accidental,’ but they belong to the essence of the Church, and therefore, just as ordained ministers, they will never be lacking in the Church.” Furthermore, “many pastors can confirm that in highly secularized countries, when new ecclesial movements arrive, a great hunger for divine life awakens in people.”

Continuing his speech, Prefect Farrell dwelt on the fruit of the Dicastery’s experience with ecclesial movements, inviting pastors “to always keep a just and wise balance in relation to ecclesial charisms and strive to harmonize the hierarchy’s duty to sustain and encourage charisms with the responsability to discern, orient, watch and correct, if necessary, these realities.”

Continuing to address his words to the pastors, the Cardinal gave them two tasks: “to respect the specificity of every charism while avoiding the temptation of absolute uniformity or wanting to impose initiatives, activities and styles of apostolate very far from the original charism” and, on the other hand, “to monitor the contents and methods of the Christian formation given to their members, their apostolate, etc., in such a way that they always conform to the doctrine and ecclesial praxis, that the freedom of people is always respected, that every kind of abuse be avoided, and any form of exclusivism, elitism, or even open conflict with the hierarchy or with the rest of God's people, that is, with the faithful not belonging to ecclesial movements, may be excluded.”

The ecclesial movements, continued the Prefect, can “greatly help to revitalize the parishes” and “bring the Church many fruits of conversion, of authentic Christian life, of vocations in lay life, marriage and priesthood, only if, when entering into parish and diocesan life, they are helped to ‘be and to remain themselves fully.” On the other hand, the movements themselves “must always increasingly understand that the interventions of the hierarchy are not be considered as an extraneous element that imposes itself in an authoritarian way on the charism but as one of its intrinsic elements.”

In fact, according to Cardinal Farrell, “charisms are goods given in the Church” and “all ecclesial movements and communities are called to live fully that phase of ecclesial maturity which requires the overcoming old misunderstandings, anachronistic oppositions, and sees them now launched in the work of the new evangelization with a missionary impulse towards our ever more secularized world, in full harmony and—he concluded—in communion of intent with their pastors.”

Greeting those present, the Focolare President, Maria Voce, expressed “the unique desire” of “responding to the call that God has given us, by being at the service of the Church with love and passion, with an look extended towards Her expectations and needs in this particular moment of Reformation, in heartfelt assonance with Pope Francis’ pontifical program for a Church going out into the mission.” The gifts “that God has given to our movements and ecclesial communities are such—she added—when they are recognized by the Church, in the Church, for the Church and emit their perfume by serving Her.” 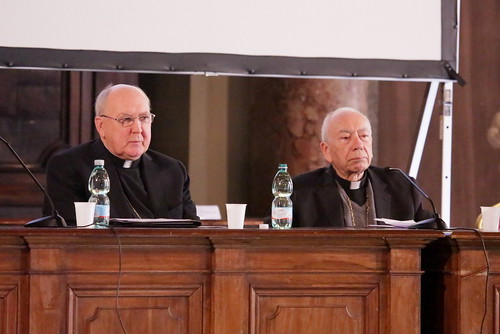 The Gospel is for everyone not just for some

Last November 29, the Italian edition of the book on the co-founder of the Neocatechumenal ...

Passion and Perseverance: The Keys of the Mission

The Prefect of the Dicastery for Laity, Family and Life, Card. Kevin Farrell, and the ...

On the 75th anniversary of the founding of International Young Catholic Students (IYCS-JECI), ...

Authority and Responsibilities of Governance in Lay Aggregations: A service ordered to the common good