Families and young people: two priorities for the Church in Angola and São Tomé and Príncipe

The opening note of the Bishops from Angola and São Tomé and Príncipe on an ad limina visit about the reorganization of the structures of their Episcopal Conference took account of the care with which they are following developments on the themes of the laity, family and life. In fact, the ECAST has adopted a systematic approach by incorporating the commissions for the Family, Laity and Life into a single body, along the lines of the Curia reform that led to the establishment of our Dicastery.

The Bishops - visiting our Dicastery on 12th April last - said that the family desired by God has been ravished in Angola.  Therefore, for three years the Church has focussed on the entire family (family and sacrament of marriage; family and reconciliation; family and culture). Contributing to the same effort of valorising Good and the family mission is also the decision to celebrate the National Family Day from time to time in a selected diocese of the Country. Pastoral agents specialized in accompanying families and especially young couples are being trained in all the dioceses.

Discussing the numerous lay movements and associations – from the traditional ones to the new communities –, the Bishops expressed their general appreciation of the support they bring to evangelization.  However, they lent special words of praise for the apostolic commitment of  PROMAICA, an association established within the Church after the long  civil war that devastated the Country.  Open to all Angolan women without distinction, Promaica is carrying out various training and micro financing initiatives for women who, in this way, become protagonists in community development.

Although it is part of the same Episcopal Conference as Angola, the situation in Sao Tome deserves a separate discussion. In fact, the Country remains one of the poorest in the world, a situation that reverberates negatively on the institution of the family and young people. Economic difficulties blur the future and sow desperation and social disadvantages of every kind. Thus, it is not surprising that many people allow themselves to be seduced by the radicalism of numerous sects that promise a more rosy future, helped in this by a local culture of fetishism.  Yet, despite this darkly coloured picture, hope still prevails. The tourism sector is certainly very promising, but São Tomé and Príncipe has only one name:  young people. In fact, with 70% of the population made up of young people, the Country and the Church can count on their proverbial resourcefulness and courage to write pages and pages about their story and reverse any inauspicious destiny.

Lastly,  after the presentation on the Dicastery’s activities, the bishops showed great interest for the sports pastoral mission as well as pastoral care of the elderly, two themes on which they requested and obtained ample illustration 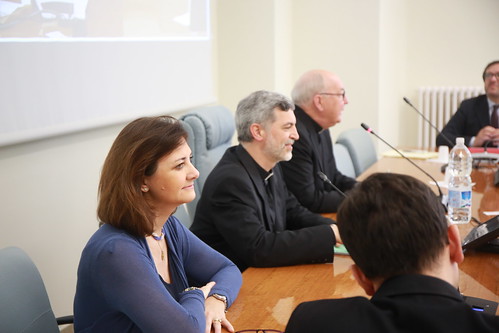 “Welcome, discovery, mission, culture, and sending” are the five "pillars" of the ...

Holy Father to young people: I look forward to August 2023!

In the video released by the Local Organizing Committee 2023, the Holy Father Francis greets ...

Lisbon: new stage in the preparation for the next WYD

"It is great to see people united for the same goal: to get the message of Jesus ...