Catholic Lay Faithful, Missionaries of Christ in the Public Arena

An ad limina visit by the Philippine Bishops is currently taking place in Rome and on 20th May last, our Dicastery received the first of the three groups. Among the many matters dealt with, we especially wish to highlight is that of young people. The Bishops recalled that in with of the celebrations scheduled in 2021 for the Fifth Anniversary of the evangelization of The Philippines, in 2013 the Episcopal Conference launched a path of spiritual preparation called “Nine years for Evangelization”. Every year since then, they have always chosen a theme to be developed in depth. This year it has been dedicated to young people because – said the Bishops – young people are asking the Church to listen to them. The Bishops also joyfully shared the experience of the World Youth Day that took place from 23rd to 26th April last in the Archidiocese of Cebu, an invitation accepted by 12000 young people from all over the islands.

Another matter touched on by the Bishops is that of gender. The Bishops expressed their concern over the growth of the gender ideology in their Country, a phenomenon from which the young generations are not sufficiently protected.  In this regard they called for an urgent change in mentality and the stressed the need to overcome the taboos on the theme of sexuality as well as training parents and educators to be able to talk about sexuality serenely and competently.

For the Bishops, another danger threatening The Philippines today and that seriously risks mortgaging the future consists of the comeback of the return to death. Many Filipinos would welcome the reintroduction of the death penalty even for common criminals, especially at the present time when summary extrajudicial executions are abounding throughout the Country with the excuse of fighting drugs and delinquency.  But another side of this death culture is enclosed within the so-called “D.E.A.T.H.S Bills” that the government is about to launch. Against “the death laws” – an expression in which the acronym Deaths stands for Divorce, Euthanasia, Abortion, Total Reproductive Health, Homosexuality (same-sex unions), Sex Education  – the Philippine Church asks how to perform their ministry without coming up against the accusation of interference in politics  On this front, the Catholic lay faithful, if adequately prepared in the teaching of the Church, can make a special contribution,  by illuminating public debate with the light of the Gospel. 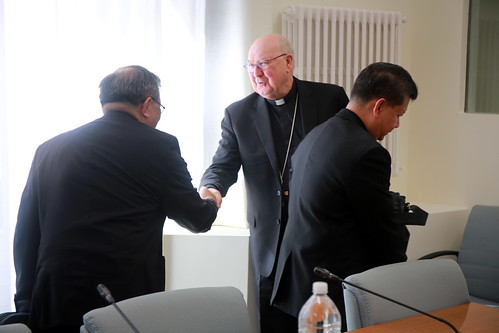 The young people of the San Lorenzo International Youth Center (the Centro San Lorenzo, or CSL) have ...

Towards a More Inclusive Society

The Forum for Catholic Inspired NGOs has recently published, in four languages, a document titled: ...

Nothing is foreign for Christians

In the basilica of Santa Maria in Trastevere, in accord with the limitations of the anti-COVID ...

WYD in the local Churches: towards a new enthusiasm

This past solemnity of Christ the King of the Universe, the Holy Father announced that, starting in ...