Ad Limina Visit of the Bishops of Honduras

“You’re doing a great job accompanying families and promoting the laity!” Card. Farrell said this to the Bishops of Honduras at the end of their Ad Limina Visit to the Dicastery for the Laity, Family and the Life.

The encounter reflected the reality of a Church that is able to stay vital and proactive in an extremely complex situation. The reality of Honduras is, in fact, characterized—as its pastors described it—by a high rate of violence that unfortunately marks all the country's realities, from the violence of the maras to domestic violence.

The family, which according to the bishops remains a fundamental institution for all the Hondurans, is suffering for many reasons: emigration—especially of men—which ends up creating many single-parent families, a machoistic cultural tradition, cultural conditioning, and the spread of the gender theory.

In this situation, the Bishops noticed that the Apostolic Exhortation Amoris Laetitia is a valuable contribution that has helped to strengthen the paths of accompaniment in the dioceses. In Honduras, the month of August is always devoted to the family, and many initiatives are realized at both the national level and in the parishes.

During the meeting, speaking at length about young people, Card. Maradiaga stressed that 40 percent of Honduras’ population is under the age of 15, and he recalled that “the desire to hold the World Youth Day in Panama was voiced by the Bishops of Central America.” The WYD is, in the opinion of all bishops present, a unique opportunity for all young people in Honduras and for all the region’s countries.

One of the most significant realities of the Honduran Church are the “delegados de la Palabra,” lay people engaged in catechesis and the proclamation of God’s Word. There are 30,000 delegados in the country, which has less than 8 million inhabitants. This type of apostolate, begun over fifty years ago, is—as Card. Farrell said—“putting the Council into practice in a creative way.” 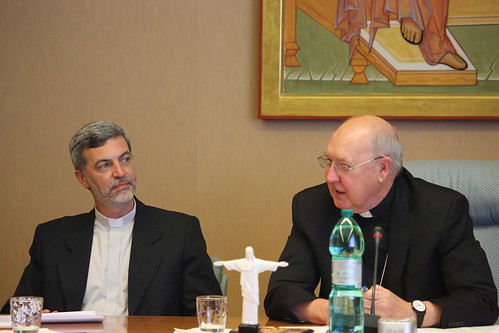 Recently, the Secretary of our Dicastery, Father Alexandre Awi Mello, participated in an ...

The Now of God