The Catholic Church, with its 8 million lay faithful, represents a very minor reality in Indonesia where 87% of the population is Muslim, making it the largest Islamic country in the world.

However, having said this, Indonesia has, traditionally, been a country with significant religious and cultural diversity even though, in recent years, various integralist movements have tried to drag the country into chaos with bloody, faith-based terrorist attacks.

The Church of God, which operates in this scenario, is a small, but dynamic, creative and growing community. Despite specious opposition that hinders its expansion, its presence is generally tolerated well and its work appreciated.   It is in this context that the bishops who came to our Dicastery on 14th June last during their ad limina visit, highlighted above all the lay faithful’s generous commitment to public life, the result of investing in the formation of a civic conscience and increasing awareness about social and political issues.   This work has led to various Catholics occupying major roles as majors of large cities, members of parliament and as secretaries of the major political parties.  As confirmation of the importance that the presence of the lay faithful in the public arena represents for this small Indonesian Church, the bishops told us they are continuing to ensure targeted accompaniment to such lay leaders so they can illuminate the political debate with the light of the Gospel and provide their important Christian testimony for the community good.  However, the bishops admitted there is still much to be done regarding the participation of the lay faithful within church life if they are to truly feel co-responsible for the life and mission of the Church.

The bishops also indicated young people as a great priority for the entire Church in Indonesia, a concern confirmed by the undertaking, since 2012, to celebrate a World Youth Day every three years in a selected diocese in the Country.  This event is only one of the many investments to ensure that young people play a major role in announcing Christ in the multicultural Indonesian society and become “agents of change” for justice and peace in their Country.

The young people are reimbursing these credit facilities with the dynamism that is innate in them and with an abundant flowering of vocations for religious life, so much so that today the Indonesian “Church is able to “export” priests to those countries that are facing a vocational crisis.

Among the many matters that emerged, we wish to also highlight the numerous national and international lay movements and associations that the bishops themselves have defined as “indispensable” in evangelization activities. They work mainly in the sectors of education, information, catechesis, accompaniment of persons and families, assistance to the poor. Their generous service means the Church in Indonesia can reach the most needy levels of the population and effectively build bridges for interreligious dialogue. 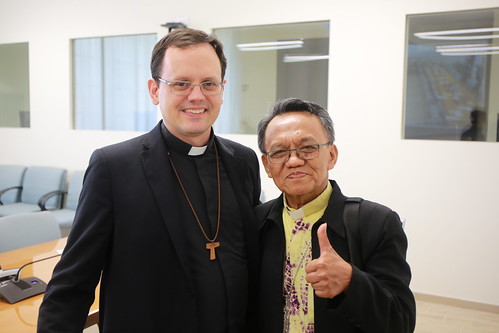 Synod on Tolerance: Walking Together in Fostering Interfaith Solidarity

Indonesia is a pluralistic country with six official religions and numerous local languages ...

"Life is a right, not death"

We publish a reflection by the Family and Life area of our Dicastery on the inviolable value ...

Bishops trace out some paths to stem the crisis of faith

Aware of the loss of ground that their Church has been facing for several years now, the ...