On 29th April, our Dicastery welcomed the first of three groups of bishops from Argentina who arrived in Rome for an ad limina visit. Speaking on behalf of his brothers, Mgr Andrés Stanovnick, Bishop of Corrientes and Head of the Family Area in CEVILAF (Episcopal Commission for Life, Laity and Family), illustrated the many pastoral initiatives performed for the lay faithful, families, young people, women, the elderly and for life.

He then highlighted the extended network of the Episcopal Conference’s bodies – some established recently – that take care of these themes. His report clearly indicated how this permanent organizational effort by the Argentine Church  takes account of the desire to adapt its structures to the changing situations in the world in which it is immersed, in order to serve the people of God better and live synodality.

The bishop praised the participation of the lay faithful in church life, highlighting in particular the generous commitment of women, thanks to whom the Church is able to express its compassion and solidarity with the poor, educate the new generations in the faith and reach those who are distant. As for the transforming presence of the laity in world realities, the bishops recognized in unison that this still has little impact.

According to the bishops, to make sure that the lay faithful truly become “the heart of the Church in the world and the heart of the world in the Church”, it is necessary to fill the gap in their religious education, which has often halted at the preparation they received for the sacraments of Christian initiation. They need to be given the instruments for an efficient witness starting from the announcement of the kerygma. The bishops clarified that this education should not be interpreted only in an academic or intellectual sense but as the fruit of a prolific evangelization work (through homilies, personal get-togethers, permanent and targeted catechesis, face to face accompaniment). This personal encounter with Christ will enable credible, new and genuine witnesses of the Gospel both in the Church and public life, in work as well as in the family.  In fact, it is here that the  much hoped-for remote preparation for marriage to form good marriage partners and parents sinks its roots. It is always from here that the lay faithful slowly learn to become upright politicians respectful of the common good.  Here they discover the beauty of every human life made in the image and likeness of God and learn to respect it.

In the specific field of training and accompaniment, the bishops often praised the numerous lay associations and movements – both national and international – which operate in the country with enthusiasm and apostolic creativity, placing the freshness of their charism and their rich baggage of missionary experience at the service of the lay faithful, young people, women in difficulty and the elderly.

In conclusion, the bishops expressed their appreciation of the WYD in Panama attended by many young Argentinians, by now an established tradition, a sign of how much the young people of today still hunger and thirst for God.

On thanking them for their fraternal sharing, Cardinal Farrell, Prefect of the Dicastery, exhorted them to turn their attention and their battle instruments to fight against   current tendencies and sow the seeds of faith in the hearts of the young generations by announcing the Gospel because this is the primary mission of the Church which exists “to evangelize”. He confirmed their choice of accompaniment as the preferred apostolic method: to accompany young people,  spend time with them and to walk alongside them; to accompany couples not only at the beginning of their union but also during their married life and welcoming, accompanying and healing wounded families. 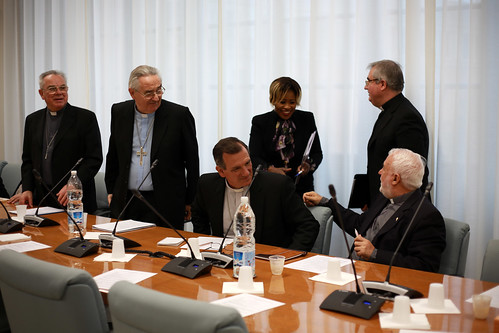 Four “waypoints” for the Road Ahead of Catholic Action

The XVII Assembly of Catholic Action Italy, entitled “I have many people in this city”, took place ...

Discernment in the Family: not and ‘isolate episode’, but a ‘permanent spiritual disposition’

On April 23-24, the Faculty of Theology - Diploma in Family Pastoral Care of the Gregorian ...

Family love: a vocation and a path to holiness

The Diocese of Rome and the Dicastery for Laity, Family and Life now present the official prayer for ...

The experience of the pandemic has exposed false certainties and revealed the pitfalls present in ...